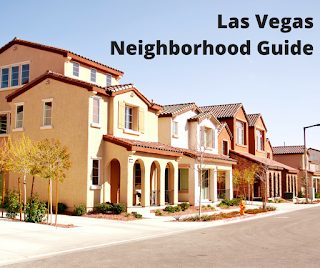 Las Vegas is a series of loosely woven planned communities and small neighborhoods, tied together by major arterial roads and shared shopping malls. As a result, individual neighborhoods are much more homogenous here, meaning one may not directly affect the next, even though they share a common boundary. Many planned communities go so far as to have their own swimming pools and community centers, with retail outlets and restaurants specifically catered to one area.
The biggest benchmark for your move is going to be your price range. Here, big money can buy gated communities with full in-home services. Mid-range money brings smaller homes in well-manicured neighborhoods, while cheaper accommodations can often mean a further commute to work and daily essentials like grocery stores. Check out some of the most popular neighborhoods below, and as always, be sure to link up with your neighborhood once you’ve found the right fit for you.

Most of the truly ritzy neighborhoods exist west of the 95 freeway, an expansive area rolling with green golf courses. Here, home prices regularly top $1,000,000, and it’s not unusual to spot celebrities leaving their gated communities to make a run to the local coffee shop.
Moving to Queensbridge: One of the toniest gated communities in the Summerlin South area, you’ll need plenty of cash to move to Queensbridge. Bulging stucco homes overlook Tudor Park or the Angel Park Golf Club, with plenty of privacy for backyard swimming pool parties in the desert heat.
Moving to The Northwest: This corner of Las Vegas is less populated than Summerlin to the south, and far enough from The Strip and downtown to feel like a real escape from the city. Nestled up against the foothills, moving to the northwest means large homes with their own identity, plus plenty of outdoor activities to keep you occupied.
Moving to Spring Valley: Spring Valley is a large unincorporated part of Clark County, west of the 15 and below Summerlin South. The large swath of flat land is home to bundles of stucco houses populating every block, with the occasional retail outlet popping up on the corner. You’ll also find plenty of celebrities here, living behind large gates that hide country clubs and palatial mansions.
Moving to City Center: Comprised of the high-end luxury condominiums of The Strip (and downtown, to some extent), the city center is a young person’s game. Flashy loft living and private elevator access gives you quick access to casino floors and live entertainment, but at the cost of space and value.

If you find yourself cringing at the sticker prices for many of the high-end communities, consider moving towards the middle. Since 2008, even moderate living means a lot more in Las Vegas than elsewhere. Pre-planned communities abound, offering plenty of reasons to stay local and get to know your neighbors.
Moving to Summerlin: Some folks may be turned off by the sheer suburban size when they decide to move to Summerlin. Individual cul-de-sacs with their own architectural flair anchor large shopping plazas and community centers, often with elementary schools just around the corner. As one of the largest planned communities in all of America, it’s easy to turn a neighbor into a friend.
Moving to Aliante: The master-planned Aliante community pushes up against the Sheep Mountains to the north of downtown. Nearly a quarter of the developed land at Aliante is designated for public use, meaning plenty of fresh air in one of the neighborhood’s city parks or hiking trails in and around their very own Nature Discovery Park.
Moving to Henderson: Many people already living in Las Vegas find themselves moving to Henderson over time. As the city’s largest suburb, Henderson offers a child-friendly living experience, with better schools and tree-lined streets. Situated between downtown Las Vegas and Lake Mead, Henderson offers everything from the traditional suburban experience to horse trails and plenty of outdoor recreation.

It’s always important to understand what you can afford before diving into a new housing market, especially in a city with which you may not be familiar. For many larger urban locales across America, the line between well-manicured homes and hard-working neighborhoods may be block to block. As such, it’s important to know before you go, so that you can make an informed decision on where to relocate, especially if you’re planning on raising a family in Las Vegas.
Moving to The Northeast: Nellis Air Force Base owns and operates much of the northeast corner of Clark County, meaning affordable off-base housing is widely available. Between North Las Vegas and Aliante, reasonable apartments and single-family homes offer basic living at a reduced cost. Dining and nightlife options are more limited here, but the slower pace is similar to the vibe you’d get from other, pricier communities.
Moving to Winchester: Just behind The Strip, Winchester is a community of contrasts. The Las Vegas National Golf Club is here, but so is the sometimes sketchy area off of Sahara Avenue. While downtown rejuvenation projects are helping to revitalize the northern stretches of Winchester, some corners still have work to be done. Choosing a home here can be hit or miss, so be sure to check out the block you live on before making any down payments.
Moving North of the 95: As a sprawling flatland cut through by Rancho Drive, moving north of the 95 means low-slung ranch-style homes and aging apartment buildings. Most of the area is hard-working and honest, and low-cost housing in the past three years is beginning to attract buyers from every step of the social ladder.  The area improves considerably the closer to the mountains you get, but the commensurate price increase may scare off more price-conscious folks moving to Las Vegas.