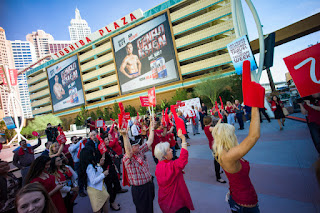 According to a recent article by the Review Journal, Las Vegas broke the annual number of visitors yet again this year with 42.9 million. This is a 1.5% increase over 2015. LVCVC forecasts a modest half-percent increase in 2017 to 43.2 million.
"Kevin Bagger, the authority’s executive director of research, told the authority’s board of directors that convention attendance also was up 7.1 percent to 6.3 million for the year, barely topping a record that had stood since 2006."
“Together with our resort partners, we look forward to aggressively marketing the destination around the world to continue attracting more visitors and break the record again this year,” said Rossi Ralenkotter, president and CEO of the authority.
"Bagger attributed the strength in the visitation numbers to the estimated $1.2 billion in private investment from the resort and tourism community last year."
He cited MGM Resorts International’s T-Mobile Arena ($375 million), the Lucky Dragon hotel-casino ($373 million), the Park Theater at Monte Carlo ($100 million), Caesars Palace’s Julius Tower ($75 million), TopGolf at MGM Grand ($50 million) and SpeedVegas ($30 million) as examples.